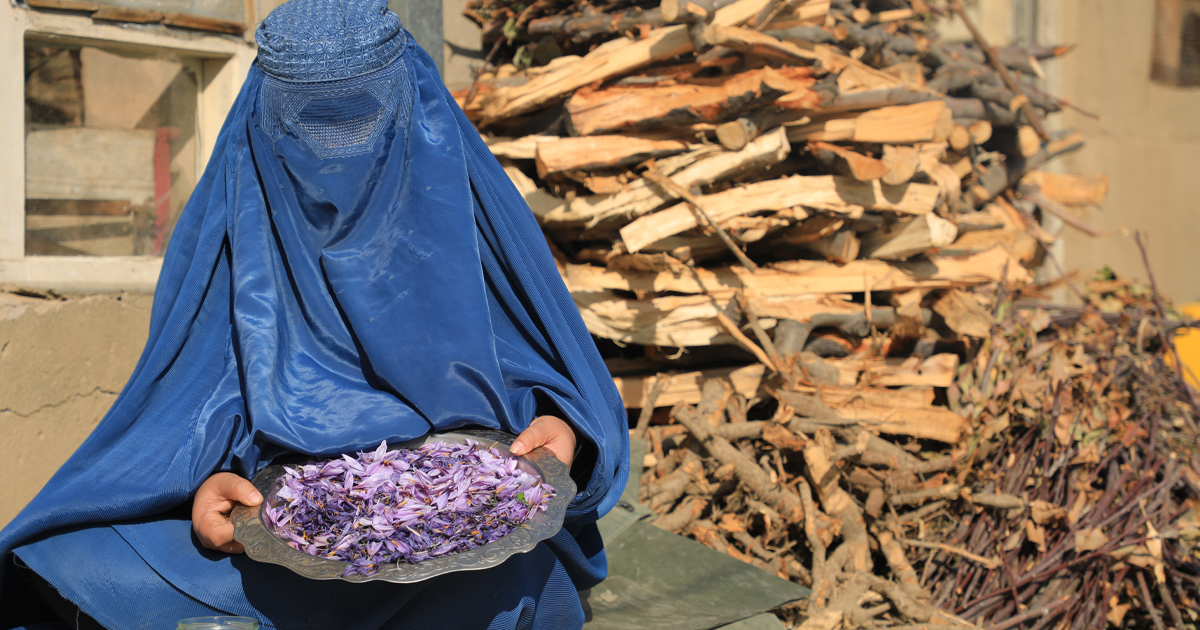 Until a few years ago, forty-five-year-old Aadela (name changed), a farmer and mother of six, could not afford to buy coal to heat her home. Today, she is the sole breadwinner of her family and earns enough to send all six of her children to school.

Her life changed in 2015, when she was selected to receive a micro greenhouse from the National Horticulture and Livestock Project (NHLP), a government program to promote adoption of improved production and post-harvest practices in the horticultural sector.

Aadela, who lives in Ghafarkhel village in Hessa Awal Kohistan district, began by cultivating the types of vegetable she was familiar with, such as cucumbers and tomatoes in the summer and lettuce in spring and winter. Neighbors bought her surplus vegetables, earning her between 10,000 and 15,000 afghanis [about $130–$195]* a month.

In early 2019, she decided to branch out into cultivating saffron after hearing about a new NHLP initiative providing saffron seeds to greenhouse owners.

In her first season, she successfully harvested about 33 grams of saffron, which she sold to a local business, which packaged the product, for 150 afghanis (about $2) per gram, earning about 5,000 afghanis (about $64).

NHLP continues to give Aadela support to improve her horticultural skills and increase her income. “We have monthly classes on cultivating vegetables in greenhouses, in which we also learn how to apply fertilizer,” says Aadela, who attends regularly. They are also taught to produce their own fertilizer from organic wastes, she says, adding “the program has been very beneficial to us."

NHLP social affairs officers have seen many families in Hessa Awal Kohistan district benefit from the greenhouse initiative started in 2013 by NHLP.

“Most women in this area didn't work outside their homes,” one says, “so we thought it would be a good idea to provide them with something to work on and at the same time provide for their families.”

"This greenhouse has helped us a lot. Before we couldn’t grow anything in the winter, but now we can at least grow enough to feed my family."

Food in All Seasons

From 2013 to its conclusion in 2020, NHLP has established micro greenhouses for 339 women in Hessa Awal Kohistan district. The beneficiaries were chosen based on financial need and access to at least 250 square meters of land. Each greenhouse was built with a 25,000-afghani (about $320) grant from NHLP.

This was the issue Basira (name changed), 40, another NHLP beneficiary, faced. A farmer and mother of two in a village in Hessa Awal Kohistan district, Basira grew wheat, potatoes, and vegetables on her 1.5 jeribs (0.3 ha) of land to feed her family but could not farm during the winter because of the cold climate in Kapisa province, located in northeastern Afghanistan. Basira’s family also struggled to buy vegetables in the winter, as prices in the local bazaar are higher than they can afford on her husband’s salary from work as a security guard. It was hard to make ends meet for many winters until she received NHLP's help to establish a micro greenhouse in March 2016.

“This greenhouse has helped us a lot,” says Basira, “before we couldn’t grow anything in the winter, but now we can at least grow enough to feed my family.” Her greenhouse skills have improved with NHLP training, and she grew a variety of crops, like tomatoes, peppers, mint, and potatoes, last winter.

She sells the surplus produce to other villagers, earning about 5,000 afghanis each time. “With the money I earn from the greenhouse, I usually buy clothes, school uniforms, notebooks, and books for my children,” she says.

NHLP covers 291 districts in all 34 provinces of Afghanistan and has reached over 500,000 farmers/beneficiaries, almost half of whom are women. It is implemented by the Ministry of Agriculture, Irrigation and Livestock and is supported by the ARTF.