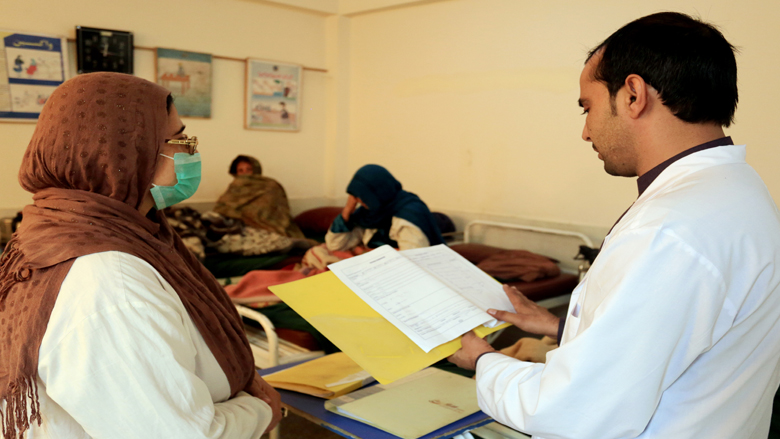 Afghanistan's economy is set to contract by between 5.5 percent and 7.4 percent in 2020 because of COVID-19, exacerbating poverty, and leading to a sharp decline in government revenues. Economic activity plummeted in the first half of 2020 as COVID-19 negatively impacted the industry and service sectors. Despite continued robust growth in agriculture following the recovery from the 2018 drought, lower outputs in industry and services, as well as declining revenues due to trade disruptions and weaker tax compliance have put government finances under pressure

Despite daunting challenges compounded by the COVID-19 pandemic, Afghanistan has maintained macroeconomic stability, created conditions for recovery, and demonstrated significant progress in human development. In 2017, approximately 8.5 million youth and children were enrolled in general education schools, representing a nine-fold growth since 2001, while the under-five mortality rate dropped from 257 to 50 per 1,000 live births from 2003 to 2018.

Higher food and consumer prices combined with lower incomes are expected to harm household welfare and increase humanitarian pressures. The poverty rate is expected to increase to up to 72 percent in 2020.

Poor nutrition, especially of children, threatens welfare and education gains. Despite a 2 percent annual reduction, 41 percent of Afghan children under the age of five are still stunted.

Revenue mobilization is expected to stall, reflecting:
i) exhaustion of revenue potential from measures implemented in 2018, including amnesty programs; and
ii) weakening customs revenues in the context of political instability and weakened governance.

Afghanistan still remains highly reliant on aid, with domestic revenues sufficient to finance only around half of budgeted expenditures. Afghanistan faces a difficult adjustment as aid flows decline from current very-high levels over the medium-term. New sources of revenues and foreign exchange receipts will be required.

" It is five days that I am here in hospital and I have had a very good experience. I appreciate the hospital’s management system. There are so many patients, but the doctors are always doing their best. "

The World Bank Group's engagement with Afghanistan is determined by the Country Partnership Framework (CPF) for 2017-2020, which is closely aligned with the government's National Peace and Development Framework. The CPF aims to help Afghanistan:

Over the CPF period, the World Bank expects to provide $250-300 million annually to Afghanistan through International Development Association (IDA) grants.  Additionally, the Afghanistan Reconstruction Trust Fund (ARTF) could provide up to $800 million per year in grants, depending on donor commitments. The International Finance Corporation (IFC) aims to expand from the current $54 million portfolio to about $80 million. The Multilateral Investment Guarantee Agency (MIGA) stands ready to provide support with a focus on finance, manufacturing, agribusiness, and infrastructure, including by utilizing its $6.5 billion fast-track facility COVID-19 facility.

" Cars used to refuse to bring us down these streets. Before, we paid 200 afghanis to bring two sairs [14 kg] of flour from the shops to our home. If the car refused, we would have to carry everything on our backs from the main road. Now, every car will take us and we pay just 100 afghanis. "

- a resident of Sarak Azam District 13 in Kabul city 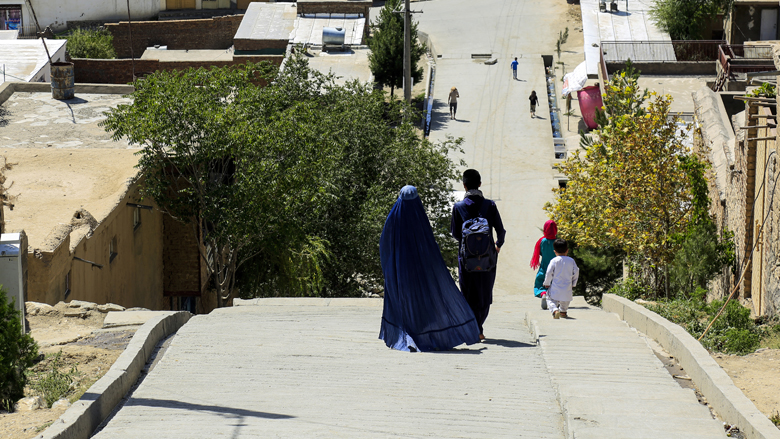 Support for the economy

The COVID-19 pandemic and subsequent containment measures have had a significant negative impact on the already fragile Afghan economy. The lockdown and border closures have led to massive disruptions of economic activity and consumption, interruptions to imports, reduced remittances, and reduced exports.

To help Afghanistan maintain its reform momentum through this challenging period and provide vital financial support to manage revenue shortfalls, in May the World Bank approved a second grant of $160 million from the International Development Association (IDA). Together with a $240 million grant from the Afghanistan Reconstruction Trust Fund (ARTF), this $400 million support sustains a range of key economic and public finance reforms to improve business regulation and encourage private investment, expand social inclusion, and support civil service reforms.

Considering the important role businesses play, the World Bank also provided a $200 million grant in July to help provide relief to vulnerable people and businesses. This package supports the government’s effort to strengthen policies that promote faster recovery and keep basic infrastructure such as water, electricity, and telecommunications afloat and running.

Continued support to the people of Afghanistan

World Bank support will not end here. The Bank has restructured its portfolio of ongoing projects in Afghanistan to release funds for the country's immediate needs and sustain the government's efforts to manage fiscal constraints.  More support is planned to improve water supply, sanitation, and hygiene as part of the COVID-19 response. The Bank is also working to strengthen financial intermediation so that micro, small and medium enterprises can have access to finance, and to expand the use of mobile money throughout the country.

Implementation progress includes: In rural areas: As of May 15, 2020, over 11,400 new CDCs were elected, more than 2,100 Cluster CDCs were registered, and almost 11,800 CDCs completed Community Development Plans (CDPs). In terms of subproject implementation, 2,880 subprojects had been completed and more than 6,300 projects are underway. There are also 28 joint projects that are ongoing across 92 communities.

In urban areas: Implementation has been rolled out in over 850 communities. A total of 850 CPs were completed; 850 CDCs elected, 850 CDPs completed, and 944 sub-project proposals approved.

By the end of the first phase of the project 1) 12.2 million Afghans will be reached; 2) 4.5 million people will have access to clean drinking water; 3) quality of service delivery in health, education, rural roads, and electrification will be improved; 4) citizen satisfaction and trust in government will increase; and 5)

" All the things that I currently know about horticulture, I owe to NHLP. I now know horticulture like a professional. I am very happy with NHLP for the work they have done for us. "

Bringing most of the efforts in public health service delivery under one umbrella in Afghanistan, the Sehatmandi (Health) Project aims to increase the utilization and quality of health, nutrition, and family planning services across Afghanistan. The project supports the implementation of a Basic Package of Health Services and Essential Package of Hospital Services through contracting arrangements across the country. Sehatmandi also supports efforts to strengthen the capacity of the Ministry of Public Health at central and provincial levels to carry out its stewardship functions effectively.

With the support of the Sehatmandi project and its predecessor project in the health section, the System Enhancement for Health Action in Transition Program (SEHAT), health indicators have seen significant improvement. For example, the newborn mortality rate fell from 53 to 23 per 1,000 live births from 2003 to 2018.

The number of functioning health facilities increased from 496 in 2002 to more than 2,800 in 2018, while the proportion of facilities with female staff increased; and between 2006 to 2018 births attended by skilled health personnel among the lowest income quintile increased from 15.6 percent to 59 percent.

The National Rural Access Project focuses on year-round rural access to basic social services. As of January 2020, More than 3,300 km of rural roads have been upgraded through projects financed by IDA, ARTF, and other funds. The program also established the new Geographical Information System based network planning and rolled out the first nationwide inventory and condition survey of rural roads.

The ARTF supported the National Horticulture and Livestock Project to promote the adoption of improved technologies by target farmers. The project has financed the establishment of 35,520 hectares (ha) of new pistachio and fruit orchards in 34 provinces. In addition, over 33,000 ha of existing orchards have been rehabilitated and some 143,000 kitchen gardening schemes were established.

Financed by IDA and the ARTF, Since 2011, the Irrigation Restoration and Development Project helped rehabilitate 206 irrigation schemes, benefiting 262,975 hectares and 591,000 farmer households. Regular data collection is now occurring from 183 hydrological and 56 meteorological stations. In addition, 40 cableway stations for flow measurement at selected hydrology stations have been installed.

Financed by IDA and the ARTF, the Women's Economic Empowerment–Rural Development Project is a follow-on project to the Afghanistan Rural Enterprise Development Project (AREDP) that aims to increase social and economic empowerment of poor rural women in selected communities. The pace of social mobilization under WEE-RDP has been remarkably high and more than 422,000 SHGs have been established as of August 2020, of which 80 percent are women’s groups. A total of 95,153 trainings were conducted by the project including its Facilitating partners in the last one year.

As of August 2020, The World Bank has 11 active IDA projects in Afghanistan with a net commitment value of over $1975 million and continues to engage in rigorous analytical work underpinning policy dialogue.

The ARTF, administered by the World Bank, is a partnership between the international community and the Government of Afghanistan to improve effectiveness of the reconstruction effort. The ARTF's support for National Priority Programs, operating costs of government operations, and the policy reform agenda is contributing to the achievement of the Afghanistan National Peace and Development Framework goals.

The Bank has actively supported key reforms, particularly in the fiscal and public administration spheres, while the non-lending activities have played a crucial role in informing the government of its strategic choices.

IFC's cumulative committed portfolio stands at $238 million and its advisory services portfolio is $11.5 million. IFC's investments have had a transformational impact in terms of access to finance and outreach.

MIGA has $116.5 million of gross exposure in Afghanistan.

The Afghanistan Reconstruction Trust Fund is a partnership between the international community and the Afghan government for the improved effectiveness of the reconstruction effort. As of May 2020, 34 donors have contributed over $12.3 billion, making the ARTF the largest contributor to the Afghan budget.

Afghanistan's achievements in the last recent years have been impressive in many ways. The coming years will be critical to strengthening Afghan institutions' ability to deliver basic services nationally and consolidate and expand the economic development gains made to date. IDA's role during this period—beyond the provision of its own resources—must be to continue to make the case for these principles, and to help the government effectively prioritize and utilize its own resources.